The Centennial Seal and Logo of the Town of Windsor

The centennial emblem, which was designed in 2002 for the centennial by the then town manager Kurt Falkenstein represents 100 years of Windsor History. Originally known as Corrowaugh by Native Americans, Windsor was referred to by early residents as "Frog Level" (symbolized by the frog) due to the many small frogs indigenous to the wet heavy soil of the area. The rich forests (symbolized by the tree) that once dominated Corrowaugh were harvested by area sawmills and the lumber was shipped by rail to the large market in Norfolk. When a train station (symbolized in the lower half of the seal) was built to serve Norfolk and Petersburg Railroad, the Town's name was changed from Corrowaugh to Windsor Station in 1854.

Men of Windsor Station answered their call to serve the Confederacy, and the Isle of Wight Rifle Grays (symbolized by the crossed rifles) were drilling and registered in 1860. This unit, under command of Captain Watkins, served with Company D 16th Virginia Regiment. The 16th Regiment served in many major battles and was with General Lee at the surrender at Appomattox. 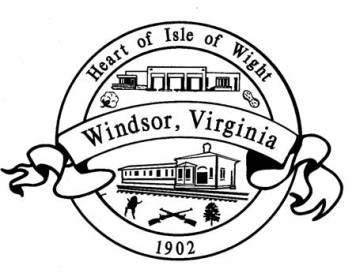 The Town's name was officially shortened to Windsor when it was incorporated in 1902.

The crossed rifles also represent the role the train station played during World War I and World War II. This small station was a major debarkation point for troops and their families when young men from Isle of Wight and surrounding communities were called to serve their country. Although the train station was demolished in 1985, it lives on in the Town's old seal and now the Centennial seal.

In 1962 the municipal building (symbolized in the upper half of the seal) was constructed to serve as both the administrative center and fire station. This building was renovated in 1995 when a new fire station was built, and the bays that once housed fire trucks became the Town's Council Chamber.

The Centennial seal brings together Windsor's rich past and promising future, and symbolizes the Town's first 100 years of existence.